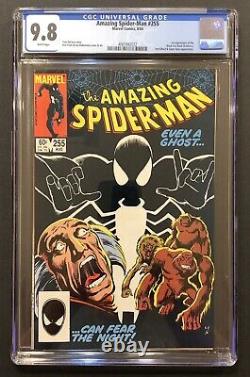 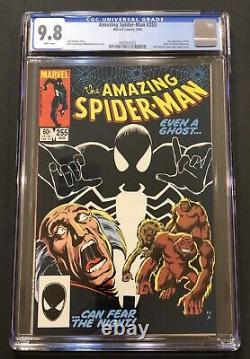 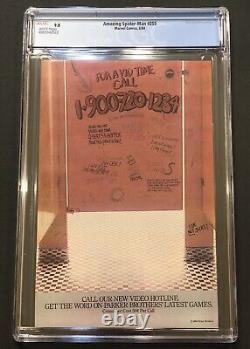 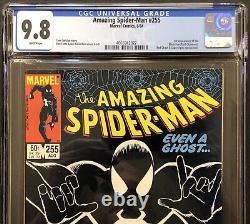 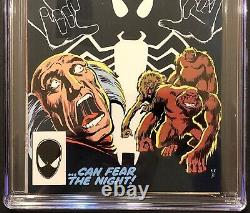 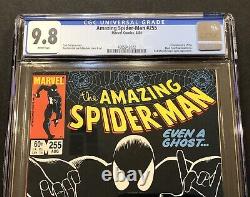 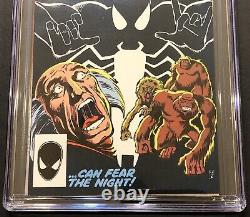 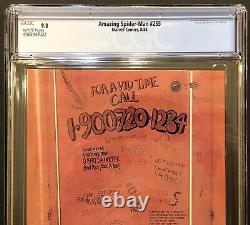 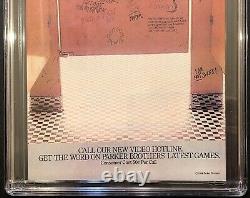 AMAZING SPIDER-MAN #255 (AUGUST/1984) NEAR MINT 9.8 with WHITE PAGES (MARVEL COMICS) AND GRADED by CERTIFIED GUARANTY COMPANY (CGC) on 21 JUNE 2022 THE 1 st APPEARANCE OF THE BLACK FOX. THIS IS A FANTASTIC AND VERY HOT ISSUE CONTINUING TO INCREASE IN VALUE! EVEN A GHOST CAN FEAR THE NIGHT! The infamous cat burglar known as the Black Fox has broken into a luxury apartment in the hopes of stealing enough loot to finance his retirement. As he grabs what appears to be an expensive vase, it transforms into Igor, of the Red Ghost's Super-Apes.

The burglar attempts to fight off the ape with a flash-bang, but is quickly subdued by Peotor and Miklho. The burglar looks on as the ape's master, the Red Ghost, rises through the floor. Shocked by what he is witnessing, the Black Fox can only scream in terror. Meanwhile, at his Chelsea apartment, Peter Parker is washing his new costume. He remarks about his recent adventure with Captain Marvel and Starfox, and how it was the second time in as many months that he has been away from the planet Earth.

After he has finished washing his costume, Peter decides to fix himself something to eat. He begins preparing to make a sandwich but decides against it when he sees that his bread is covered with mold. Sighing, he resigns to call it a night, but can't help but think about his recent battle with Jack O'Lantern, and the disappearance of the Hobgoblin's battlewagon. Climbing into bed, Peter falls asleep instantly. No sooner is he asleep, than his costume descends from the clothesline he hung it on and creepily oozes across the floor toward him. At that moment in the luxury apartment, the Black Fox has regained his composure. The Red Ghost has just finished introducing himself and has poured the Fox a drink. He explains that he has been hiding out in this apartment until he can complete his Cosmicizer, a device that will enable him to increase his cosmic powers a thousandfold. Instead, he has decided to have the Black Fox steal the needed component for him, threatening to kill the thief if he refuses. The following morning, Peter Paker is rudely awakened by his landlady, Mrs. Muggins, who tells him that he is late with his rent again. Since it is too late to make a visit, Peter decides to try and call his Aunt May to smooth things over. Before he can explain why he was late to dinner the night before, Nathan hangs up. With nothing else to do, Peter decides to go out web-slinging to try and clear his head. As he swings across the city, Peter notices how exhausted he is and wonders why, since he slept most of the day. He also wonders what the Black Cat has been up to, as he hasn't seen her since their recent battle against the Blob. He also feels bad that he has been getting her to take pictures for him to sell to the Bugle, especially since he is being praised for her superior camera work.

After limbering up, Spider-Man decides to continue his search for the Hobgoblin's battle van. The Red Ghost has sent his Super-Apes along with him, to ensure he doesn't try to escape. Spotting a jewelry store, the Fox attempts to break in, but he is pushed aside by Miklho who rips the security door off the building, setting off the alarms.

The police arrive on the scene, just as they enter the vault. To keep the police busy, The Black Fox sends Peotor out, directing him to use his magnetic abilities to keep the officers at bay. With the loot in hand, the Black Fox decides to use this opportunity to make his escape. He blinds the apes with another flash bomb and makes a run for it. The commotion attracts the attention of Spider-Man who decides to investigate what is going on.

Seeing that the jewels were forgotten, the cat burglar recovers them and rejoices that he can finally retire. Meanwhile, the Super-Apes return to their home where to be scolded by the Red Ghost. The masked hero has the upper hand against the Super-Apes and tricks them into destroying the cosmicizer, much to the Red Ghost's frustration. When the police arrive at the scene, the Super-Apes keep them and Spider-Man at bay long enough for their leader to escape. With the battle over, Spider-Man laments over the Red Ghost's escape, wondering what else could possibly go wrong.

At that very moment, across town in a warehouse, the unknown individual responsible for recovering the Hobgoblin's battle wagon, discovers Spider-Man's spider-tracer on the vehicle and crushes it in his hand. As the issue ends, he vows that when they next meet, he will destroy the cursed wall-crawler once and for all. WE DO NOT USE COVER OR STOCK PHOTOS FOR COMICS IN ANY OF OUR AUCTIONS NOR HAVE WE DONE THIS IN THE PAST. THERE ARE NOT ANY CRACKS, SCRATCHES, ABRASIONS, OR SCUFFS ON THIS CRYSTAL CLEAR SLABBED EDITION OF SPIDER-MAN #255 EDITION - A FANTASTIC COPY IN A PERFECT CASE!

THE CERTIFIED GUARANTY COMPANY (CGC) CERTIFIED GRADE FOR THIS ISSUE OF AMAZING SPIDER-MAN #255 IS NEAR MINT 9.8 WITH WHITE PAGES (10). THIS WOULD MAKE AN EXCELLENT ADDITION TO ANY COLLECTION.

THIS ISSUE WAS GRADED BY CGC ON 21 JUNE 2022 AND THE CERTIFICATION NUMBER IS. YOU CANNOT GET ANY BETTER THAN THIS ONE! IT WOULD BENEFIT EVERYONE AS WE ASSIST OTHER SELLERS IF AN ERROR IS FOUND IN THEIR LISTINGS. WE APPRECIATE THE FEW THAT HAVE CONTACTED US IN THE PAST AND THANK YOU VERY MUCH. WE WORK HARD TO VERIFY EVERY PIECE OF INFORMATION PROVIDED TO YOU. HOW WE PACKAGE YOUR CERTIFIED COMIC BOOK(s).

THEY ARE PACKAGED LIKE FT. KNOX IN THE SAME METHOD SURROUNDING BY BUBBLEWRAP BETWEEN TWO (2) STRONG CARDBOARD SLABS FOR ADDITIONAL PROTECTION. WE OFFER THE HIGHEST QUALITY ITEMS IN OUR STORE AND BACK OUR COMICS GRADED IN UNCERTIFIED AND CERTIFIED CONDITION.

PLEASE BE 100% PERCENT CONFIDENT YOU HAVE ALL OF YOUR ITEMS IN YOUR CART. WE WANT TO BRING THIS TO YOUR ATTENTION TO PREVENT ANY ISSUES. WE APPRECIATE YOU VISITING OUR STORE AND PLEASE COME BACK SOON.

WE CONSISTENTLY STRIVE TO UPDATE OUR STORE INVENTORY WITH UNCERTIFIED AND CERTIFIED EDITIONS. THANK YOU VERY MUCH FOR VISITING OUR STORE AND PLEASE COME BACK TO REVIEW OUR SELECTIONS. This item is in the category "Collectibles\Comic Books & Memorabilia\Comics\Comics & Graphic Novels". The seller is "j41776" and is located in this country: US.