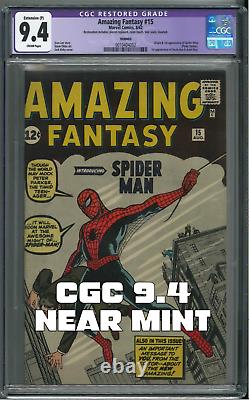 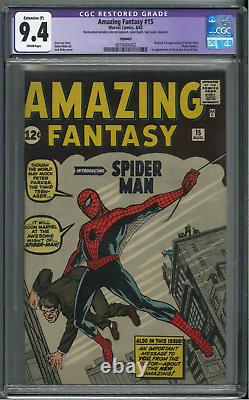 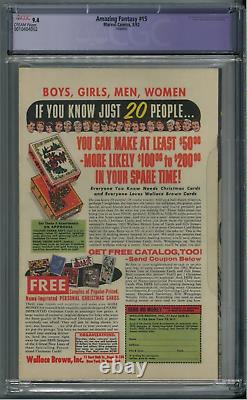 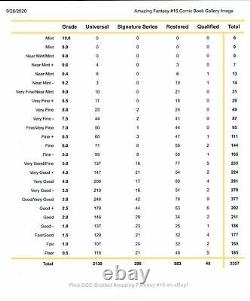 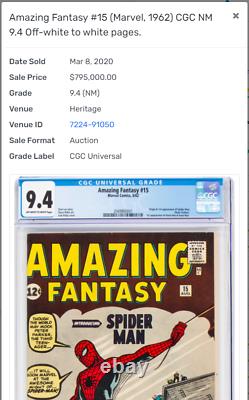 If this book doesn't sell in the next few weeks I'm going to take it off the market so act now! Only five other books have ever received this grade (9.4 NM) from CGC. This book is in the top 1.1% of graded copies. It has been very professionally restored and really shows like a 9.8. I cannot find a single flaw on the book. You can see that the price for Amazing Fantasy #15 continues to shatter records and just continues to go up and up. About Amazing Fantasy #15 and Spider-Man.

Amazing Fantasy #15, published in 1962, features the first appearance and origin of Spider-Man, long the most popular of the Marvel heroes with a fan base that continues to grow larger across the world as the years go by. Amazing Fantasy #15 is considered to be the "Holy Grail" of comic books by thousands of Silver Age collectors. Published as the final issue of an anthology series, with no promotion at the time, Amazing Fantasy #15 managed to greatly exceed initial sales expectations and led Marvel to launch the character in his own title, Amazing Spider-Man , which recently surpassed its 800th issue and remains by far the most collected run in the hobby.

In 1962 comic book collecting was still a couple of years from taking off as a significant hobby. Thus most of the copies of Amazing Fantasy #15 were read and then disposed of by the purchasers, similar to how one today would treat a newspaper or magazine. Of the very small percentage that survived, only a tiny handful were kept in pristine shape. In Spider-Man, writer Stan Lee and artist Steve Ditko developed a hero for the ages--as different as could be from a super strong alien pretending to be mild-mannered reporter, 15-year old Peter Parker was a genuinely shy and awkward (albeit very intelligent) high school student with no friends, no parents or siblings and only an elderly Uncle and Aunt to love him. After gaining his powers from a radioactive spider bite, Peter creates his costumed persona not to fight crime but to become a TV star. After a TV appearance, Peter fails to stop a police man from capturing a burglar because he doesn't think it is his business. He tracks down the criminal, only to find to his shock that it is the same burglar he failed to stop earlier. The story ends with the narrator uttering the now immortal words, "With Great Power Comes Great Responsibility". Within a few years of his introduction Spider-Man was the most popular hero at Marvel with the best rogues gallery of villains and supporting cast ever created. In 1967, he receives his own animated series which exposes Spider-Man to an audience of millions, most of who never forget his catchy theme song Spider-Man, Spider-Man, Does Whatever a Spider Can... The 1970s brought additional Marvel titles starring Spidey and a live action prime time TV series, which suffered from the lack of sophisticated special effects on a TV budget. When technology finally caught up with the imagination of Lee and Ditko, Spider-Man was launched as a big budget movie franchise, starting in 2002. With seven solo films behind him and many more likely to come, Spider-Man is bigger than ever. 58 years after the publication of Amazing Fantasy #15, Spider-Man is a household name throughout the world.

Amazing Fantasy #15 in all conditions remains in extremely high demand. The item "AMAZING FANTASY 15 CGC 9.4 NM SUPER HIGH GRADE SPIDER-MAN ORIGIN 1962" is in sale since Tuesday, April 27, 2021. This item is in the category "Collectibles\Comics\Silver Age (1956-69)\Superhero\Spider-Man".

The seller is "slarnage" and is located in Mission Viejo, California. This item can be shipped worldwide.